At the turn of the century…er, the previous turn of the century, like 1900, sports like hare scrambles, enduro, and motocross didn’t exist.  Motocross is clearly the most popular form of offroad motorcycle competition now, but it didn’t really even exist in the USA until the late 1960s.  Waaaay before any of these sports started, there were basically 2 types of organized motorcycle racing – board track racing (which eventually evolved into dirt track racing) and hillclimb.

The X-Games are now filled with all kinds of mind-bendingly awesome stuff, but the original extreme sport was hillclimb – and there were factory teams too…it’s just that the factories were companies like Indian and Harley-Davidson – there were, in fact, no motorcycle companies in Japan at all.  Bikes back then had no suspension, made very little power (compared to modern bikes), and were ridden by competitors who didn’t even wear helmets.  Things have changed a lot – but I recently was directed to an article about a custom bike builder who created this homage to the American factory hillclimbers of the past: 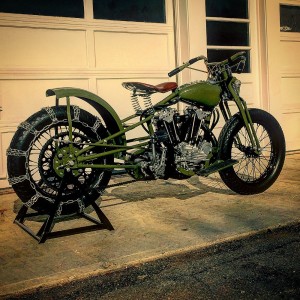 There’s a lot of ingenuity in that bike that isn’t exactly period-correct…but the overall effect certainly is.  Do yourself a favor and give the article on Revzilla.com a quick read.  Cool stuff!